New on the chain: Ethereum 2.0

The new competitive advantages of the blockchain ecosystem for broader business models and institutions.

The start of the decade will be great. Ethereum, the most used blockchain ecosystem and the host of the second-largest crypto asset by market capitalization will launch a package of new updates: Ethereum 2.0. Starting in early 2020 and finalizing in 2022, the new set of developments and updates for Ethereum will be a major event affecting the new wave of digital transactions taking the stage in the global economy.

The transition to Ethereum 2.0 will set a precedent for the development of projects and developments being built in the blockchain platform. Thanks to the smart contract functionality, that allows plenty of use cases, Ethereum popularity is now global and it goes across multiple industries, especially among institutional players and large corporations. Many major international institutions and banks have preferred this blockchain ecosystem acknowledging it as the most trusted and secure public blockchain currently to write smart contracts and dApps.

With this article, we want to analyze in detail the new concepts and functionalities that will be introduced with Ethereum 2.0, to prepare for the transition that will improve scalability and lower the entry barriers for new developers.

The Ethereum project 1.0 was started at the beginning of 2014 and launched in 2015. Since then, it has become the most used blockchain with the highest number of developers and projects built in the ecosystem. Ethereum 2.0 will be a new blockchain that will coexist alongside the legacy chain.

The new pack of improvements is not the first one to be done on the network, but it is expected to be the most substantial one, allowing the blockchain to compete with the global rate of transactions.

Ethereum 2.0 is much more substantial than many of the previous updates of the blockchain as it introduces many new ideas and concepts. However, it builds-in the current Ethereum project: it will, for instance, still use the same currency (ETH), since the improvement-package is thought to continue and enlarge the ecosystem, allowing a bridge for projects to migrate to the new chain.

The new developments and improvements are thought to make emphasis on scalability, security, and simplicity while focusing on true decentralization. Among others, the update which is called Serenity, will lead to the implementation of the new, eco-friendly transaction validation mechanism: Proof-of-Stake (PoS). This new validation mechanism does not use computing power to decide who can validate the next set of transactions, like Bitcoin and Ethereum 1.0 does at the moment. Instead, anyone can use their Ethers as a stake to validate transactions. When validating transactions correctly, the validators are rewarded and bad actors are punished by losing a part of their stake. Besides it, it will build-up massive scalability potential due to new possibilities of on- and off-chain scaling efforts, as well as the feature to write decentralized applications (dApps) in many different programming languages, democratizing the ecosystem further and opening it to a broader audience.

Both Ethereum 2.0 and 1.0 will run in parallel, given that the implementation of the second version will be done in four phases (0-3). Ethereum 2.0 will be fully operational in 2021, hence meanwhile, Ethereum 1.0 will still be used for all transactions and for smart contract execution.

Given this overlap, one of the key elements of the transition to Ethereum 2.0 will be the migration of both the ETH tokens and the smart contract states of the Ethereum 1.0 chain. For this purpose, the center of the system will be the beacon chain. 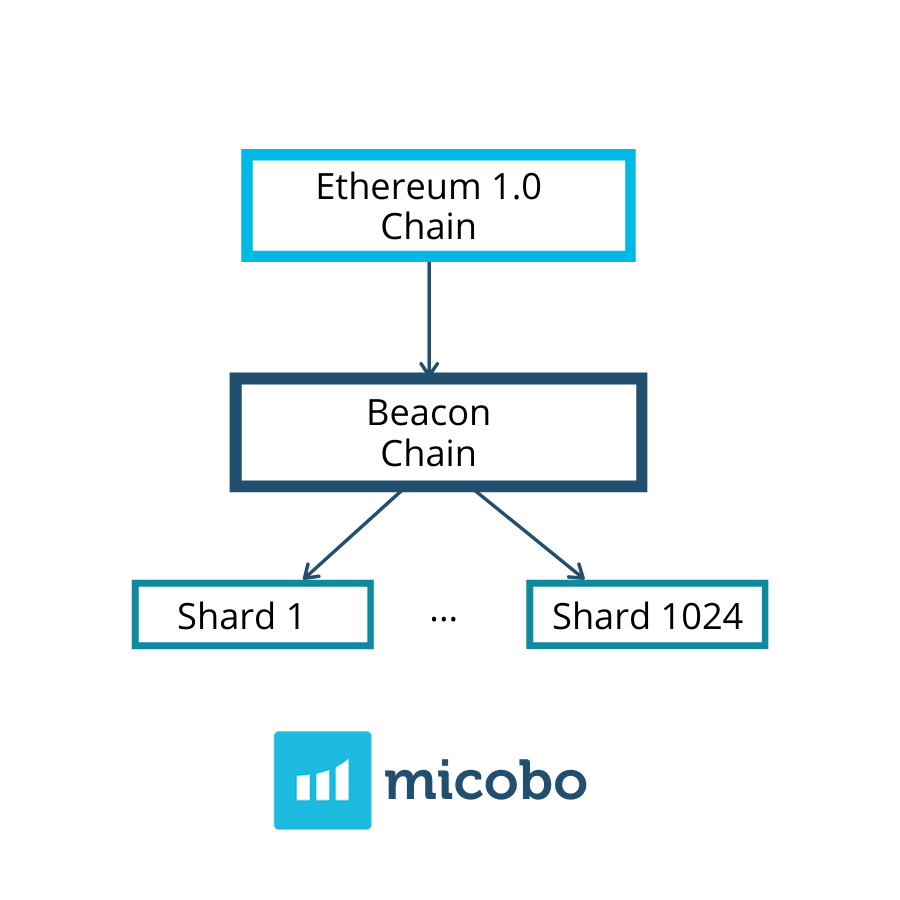 The beacon chain is a new PoS blockchain that will have the purpose to manage the consensus with the help of the new miners. It has a connection to the Ethereum 1.0, being the bridge from which all the tokens will be sent to the new chain gradually.

Since Ethereum 2.0 will continue the ecosystem, the idea is that everyone can take all the assets they have on the existing Ethereum 1.0 network, move them through the beacon chain to the 2.0 network, without the possibility of moving them back again to Ethereum 1.0. This transaction will be done through smart contracts that lock the crypto-assets and generate a chain of cryptographic hashes, that can be included in the beacon chain to prove that the assets cannot be used on the legacy chain anymore. Like so, in 2020, ETH token holders will be able to lock their tokens and receive an equivalent amount of ETH2 in the beacon chain. 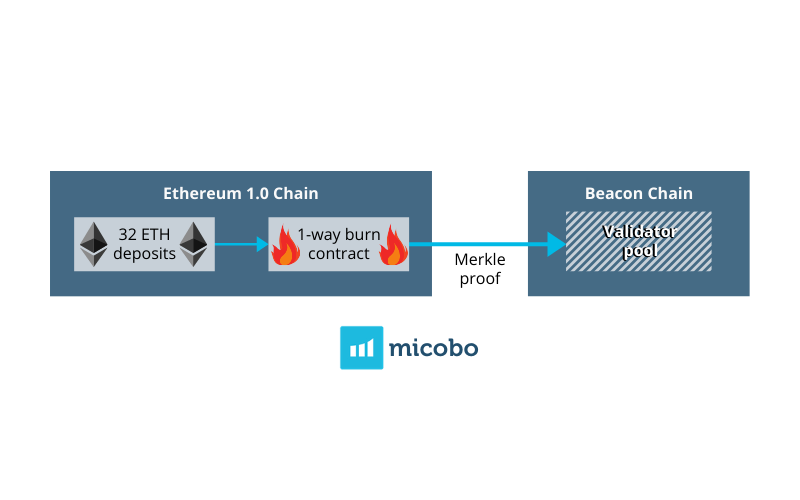 Now, the ETH2 tokens will not be transferable until 2021, implying that all transactions locking the ETH tokens into the Ethereum 2.0 chain done in 2020 will be limited. These users have a tradeoff: they will not be able to access or transfer their locked ETH2 tokens until 2021 and if the number of locked tokens is at least 32 ETH, they could be eligible to be validators in the new PoS mechanism.

The most important change that will be introduced is the switch on the staking mechanism. The current Ethereum network uses a Proof-of-Work (PoW) consensus algorithms, where one of the network participants is elected as a block proposer if he finds the solution to a particular mathematical problem first, allowing it to decide the contents of the next block that will be added to the chain. In this case, the computer power of the participants determines the probability of being selected, since the faster it answers, the better.

In contrast, Ethereum 2.0 will start using a Proof-of-Stake mechanism, in which the block proposers will be selected according to their amount of ETH tokens (stake), instead of relying on computer power.  This improvement helps to hinder the plausible dominance that big hardware farms can build based on the current staking mechanism.

With PoS, the total stake for the selection of each block proposer will consist of the sum of self-stake and the stake delegated from other token holders. “The validators in PoS are equivalent to mining pools in PoW, and the staking tokens in PoS would be the equivalent to application-specific integrated circuits (ASICs) in PoW” (Bank Frick).

Moreover, this new consensus mechanism will always have a 100% certain finality, something that makes Ethereum a competitive blockchain within institutional users and enterprises. The current finality of Ethereum 1.0 is probabilistic, which means that a transaction can never have a 100% certainty. Therefore, unfortunately, Ethereum 1.0 cannot be used in certain financial markets, as a 100% finality is required by law and 99.9999999% is not enough. Ethereum 2.0 finality will be provided faster through a consensus mechanism called “Casper the Friendly Finality Gadget” (FFG), that combines PoS to make finality deterministic with 100% certainty. This will open Ethereum to a range of new institutional markets.

Currently, most of the blockchains available in the market are limited to 15 transactions per second, given that block times are on average about 14 seconds, and, in the worse cases, they can go above one minute.

Additionally, most blockchains are pseudo-anonymous, where an address cannot be linked to an identity but still every action on the blockchain is completely transparent. Ethereum 2.0 will enable so-called off-chain scaling solutions, where transactions can be conducted without being limited to the scalability or privacy of the underlying Ethereum blockchain, but can still guarantee the correct execution through cryptographic measures.

The goal of the Ethereum 2.0 improvements is to try to cut down the delta of usability between blockchains, as they exist now, and centralized system on every front. Hence, increasing the number of transactions that can happen on the network to a level that keeps the pace with the global economy. That is why, Ethereum 2.0 will potentially process 10 of thousands of transactions per second, making it a more competitive offer among the other blockchain ecosystems existent in the market.

All of these changes will prove the real usability of Ethereum on an enterprise level. Thanks to the implementations that will be finalized in 2021, concerning issues like privacy and scalability of transaction-rates will be solved, making the Ethereum ecosystem evolve with plenty of competitive advantages, leaving behind the shortages that used to hindrance its usage for some business cases.

Hence, developing solutions on the Ethereum ecosystem and keeping updating the platforms to compete with the new improvements is crucial. The Ethereum blockchain is here to stay, as it has been since it introduced the game-changing feature of smart contracts. Many new business models will benefit from the implementation of improved processes and systems on digital Distributed Ledgers and the update coming with Ethereum 2.0 will definitely open the path for plenty of growth opportunities across different industries.

If you are ready to increase your business growth using Ethereum 2.0, contact us to know all the benefitis you can get from it!